Sharing the lessons I teach at the Artist Guild and the personal discoveries in my art.

How I changed an old painting - repost. 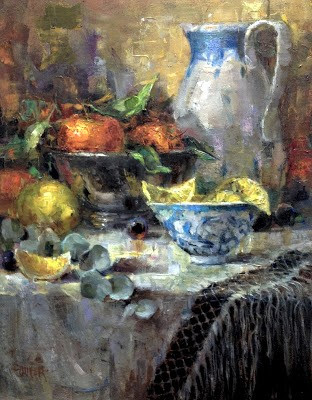 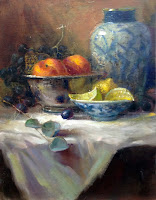 ARTIST NOTE
This was painted
after taking a
workshop from
Qiang Huang and I was quite pleased
a few with areas of it but this was
back before
I started to use my
Fracturing Technique.
The only parts I
liked were the
brush marks
on the lower cloth.
I copied exactly what he did
because I love Qiang's brushwork!
After some time
the analytical part of my brain kicked in. 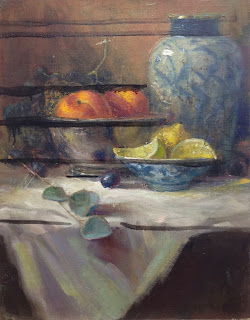 Look at the way
it is all lined up.
DUH....
what was I thinking!
Have to learn to watch
out for the tangents.

I lightly sanded
the old surface then
rubbed a little
linseed oil with a
small amount of
Gamsol added. 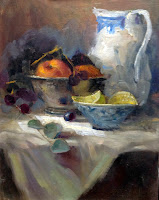 I changed the
shape of the vase
into a pitcher so it
would curve into
the painting and also
moved it in from the
edge. I lowered one
of the peaches and
got rid of the middle
lemon in the small
bowl.  I brought
forward the base of
the small dish holding
the lemon slices by
making it deeper so
it no longer lined up
with the grape. 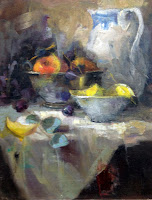 Then I made the back wall
lighter so the jug would fit
into the passage of light.
I needed to move the
eye around and away
from the top right of
the painting so I
added a slice near the
left edge. I intend to fill
out more of the eucalypti
stalk later. I added fresh
paint all over so I could
start to fracture.

At this point the painting starts to speak to me and I listen.
I have to ask myself what I like and what I do NOT like.
Looking at it in the mirror I decide I should dump it.
BUT...darn it, I have a class I am doing this in front of
so  I will have to ...
excuse me,
but I cannot resist...Keep Calm and Carry On!

I realize I do NOT like the dark area of grapes PLUS
the lower two dark corners. It was like having an arrow
pointing down off the bottom!

What to do? Does it matter?
I decided it did - if only as a valuable learning experience.
I wanted more color...and for it not to be so stiff.
This was a personal taste issue more than correction.
I already had some clementines
so I changed the grapes into an orange and lemon
then automatically the peaches appeared to change
just by using the leaves to make them become clementines.
I took the cloth all the way to one corner and
added the fringe to break up the large dark area
...still to be perfected.

The image above shows developing the fringe.
I ended up taking it further back on the table
Placing the glass over it first to make corrections
on the glass see if I would like it 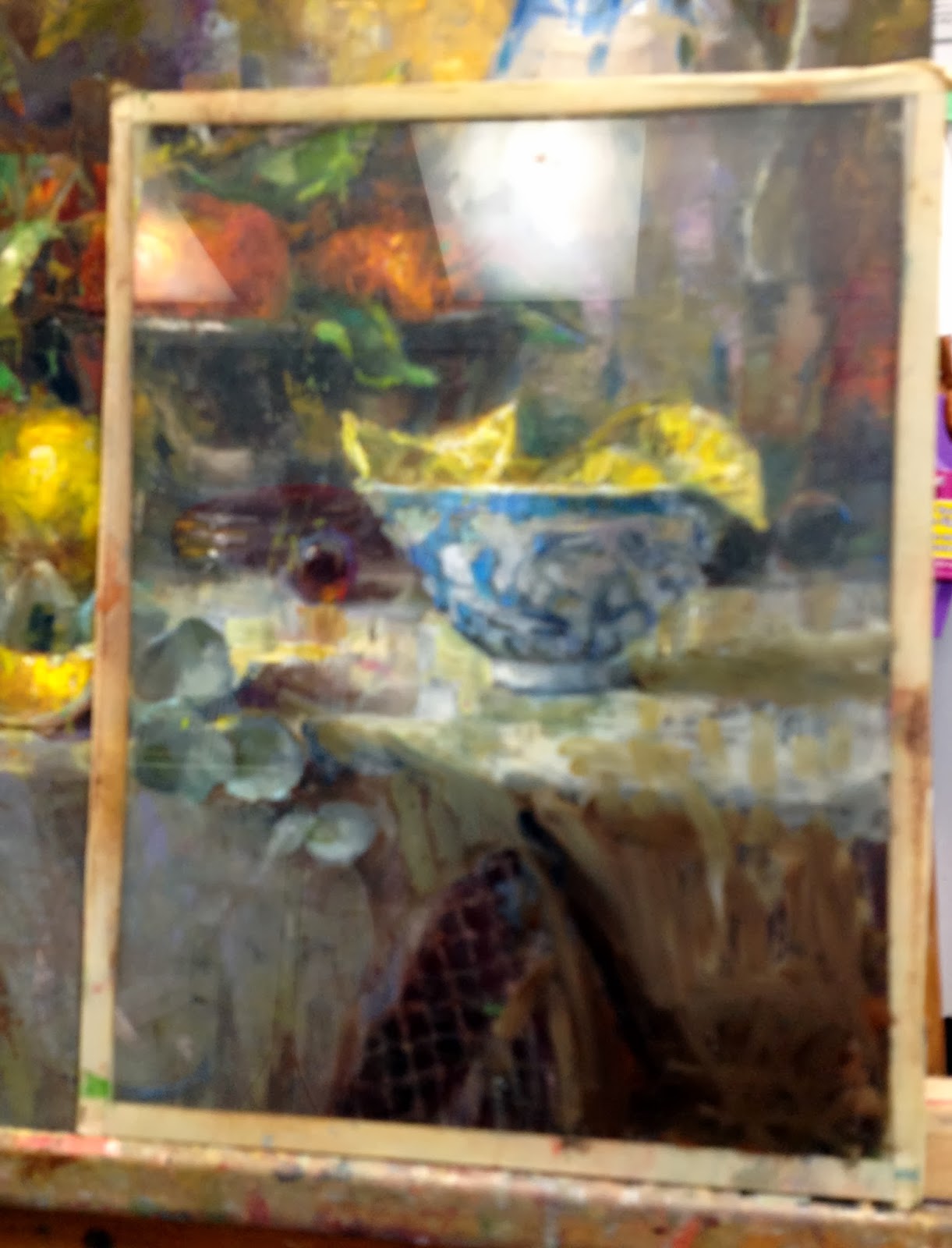 I know I have to do some finessing in
several areas to satisfy my
unresolved feelings about this painting.
I think we all have paintings like this and it can be
a great way to discover our reactions to many
aspects of our artwork.

In my case - style change and knowledge growth.
Look what has happened on the glass since I did the very top
pic. An "off with its head " moment and got rid of the fringe.

Made the background lighter too.

Will this EVER be finished...

Does it matter? That is the important question.

Am I enjoyed playing around with it?
You betcha! I learn a lot by risking ruining a painting than
having the attitude of trying to save it, just to sell.
Maybe this one will never be completed.
But as a learning experience, it was very informative. 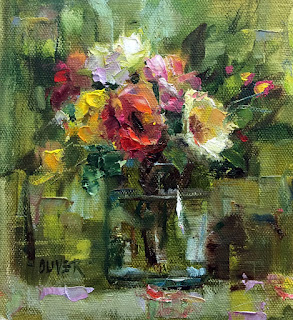 This was a demo to show the importance
of having a transparent underpainting.

Artist Note.
I had a request
to repost this one from last year .

I am a big believer in leaving
some of the darker areas in
a painting, transparent.
There is a certain glow which
doesn't happen with opaque
dark areas  - in fact I find
they can look, pretty "chalky." 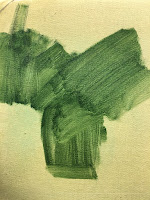 After a wash of TOY
I did a mass shape using  Viridian. 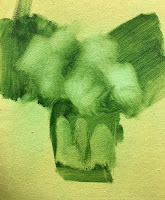 Next I lifted out the lighter areas
using a rag.

I followed this with more lifting
with a small amount of Gamsol
on my rag and a scrubby brush.
This was to hit my lightest areas.

I added Viridian and Ultra
with touch of Aliz to make darker
greens in jar and leaves.

I added more TOY to back and front.
and shadowed the area
behind the jar
linking into the dark leaves 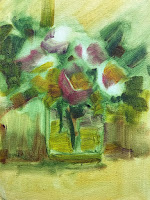 Bringing in color but making
sure to keep it all transparent. 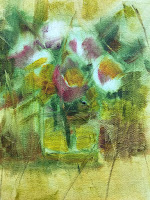 Then the fun part - I fractured it!
(See FREE tutorial on tools and what
I use for fracturing  HERE )

Now into the opaque colors.
I added
Titanium
Permanent Yellow and
Permanent Red light to my palette

I started using a knife and a brush
at this point.
I left the flowers
very abstract on purpose.
That was the easiest part -
because they were all imaginary.

There are transparent areas
peeking through the opaque
marks, and to me it makes
for an exciting surface.
Thick - thin,
transparent - opaque,
warm - cool.

If you are not already using the
transparent colors - or have not
used them for a while then
please let me know if you are
inspired to try them. 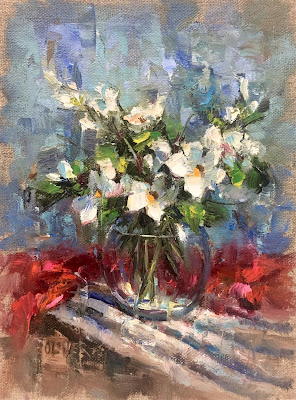 Artist Note.
I am always fascinated with stripes.
The hard part is fracturing them
so they are not hard and straight
but still look like stripes..

I was playing around with  leaving
the natural linen color as a border.
It didnt work for my style.
Bummer!

There is a wonderful artist
who does this very effectivly.
Check him out  - see link below.
Click on
one of his landscapes to enlarge
and see how effective it is.


A little aside for those who know
what is going on in my life.
The house was just appraised
on Tuesday by the VA. We have no idea
how long before we get the results.
Fingers crossed! 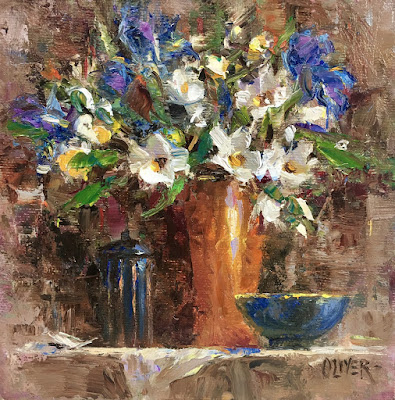 Artist Note
A lot of work goes into making
a full size still life onto
such a small board.

I was trying something new...
so, please
let me know that when
you first saw it
you could tell it was mine. 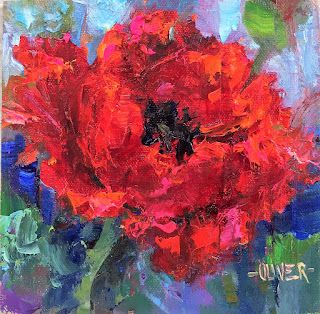 Artist Note
I have a new red tube of paint
I wanted to try out.
Holbein's Rose Dore
I thought it was a cool red.
Wrong!
Look below
The swatches are of transparent reds.

I found
Rose Dore
to be a beautiful transparent red.

All colors cool down adding white but the
Rose Dore managed to stay warm
by comparison.
I like it.
I will add it to my box for when
I want a glowing, transparent underpainting

I went to the store and
bought a beautiful red silk poppy
and held it under a light.
It was fun to paint ...
and not so much fun to photograph.
It took as long to get the above image
closest to the real one as it did to paint it. 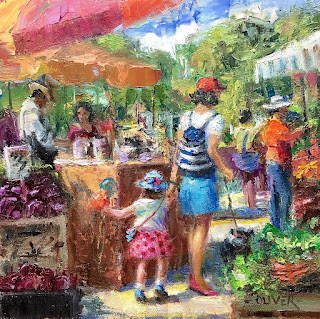 I thought a spot of sunshine for my
blog followers in the brutally
cold areas
would be a reminder of what
lies ahead for you all!
Sending warmest thoughts
your way.
Keep safe!

I enjoyed painting this and kept adding
to the composition...putting in and taking out.
taking me time and having a good time.

It is from sketches and photos
I have done here at the
Farmers Market in Las Cruces -
but I took out the buildings along
Main Street.
Could be in France!


I enjoyed the most marvelous
time before and after Christmas,
even though we all had to clear out
of the house
for viewings a couple of times.

The kids took it well and piled
all their "stuff" back into cars
because the closets had to
be kept neat!

No sibling fights,
lots of laughter and reminiscing
about good times in the house.
Perfect.
Now the perfect buyer is welcome
at any time.

juliefordoliver.blogspot.com
I am a painter living in Las Cruces, NM. After many years as an illustrator I turned to fine art to develop my own artistic voice. I currently teach talented and enthusiastic artists in oil, acrylic and egg tempera painting. I am also a member of the Artist Guild of Southern New Mexico.
Newer Posts Older Posts Home
Subscribe to: Posts (Atom)

All paintings are unframed and look neat placed on a little stand or may be easily placed into a frame. They are available through my Daily Paintworks Gallery
See above.
Color may vary slightly due to differences in viewing monitors.
Satisfaction is guaranteed. Please contact me within 15 days of delivery to arrange for return in its original condition and full refund minus shipping.
Please feel free to contact me anytime.
Thank you

Promote Your Page Too