Sharing the lessons I teach at the Artist Guild and the personal discoveries in my art. 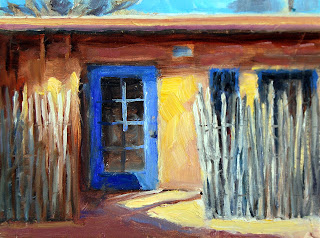 In the historic town of Mesilla, New Mexico, there is an old adobe
of great interest  - especially for local artists.
The original owner was named Josefina
and the name has stuck.
The front gate is called Josefina's Gate and it is an icon.
Painted and photographed hundreds of times by many artists as well as tourists.
In recent years it has opened up as a restaurant with a lovely
patio full of character and typical New Mexican details.
The fence shown is very typical. It is called a Coyote Fence.
It is made from tree branches and I am sure as the name suggests,
it was to keep the coyote's out! Not the rattlesnakes though, they get past anything!

Below is the famous front gate

The plein air groups from Las Cruces and El Paso met at
Josefina's this morning to paint and the truck owner kindly
moved it out of the way.
By that time I had already set up at the back.

I painted the house, windows and door first and then painted
the fence over them. I used a shader on its tip/edge.
Starting at the bottom I would lift the brush upwards and stop...
then lift up again, stop, repeat, to create the uneven shapes of the branches.
If I had done one swift stroke they would have looked too even.
I changed colors slightly, cooler in the shade and warmer/lighter in the sun,
but some of the branches were very grey and I painted them as such..

Posted by juliefordoliver.blogspot.com at Friday, March 23, 2012

I love that you are taking the time to comment and thank you for it. I am sure other readers will enjoy them too. If you cannot comment through this format then email me at juliefordoliver@gmail.com
Cheers,
Julie

All paintings are unframed and look neat placed on a little stand or may be easily placed into a frame. They are available through my Daily Paintworks Gallery
See above.
Color may vary slightly due to differences in viewing monitors.
Satisfaction is guaranteed. Please contact me within 15 days of delivery to arrange for return in its original condition and full refund minus shipping.
Please feel free to contact me anytime.
Thank you

Promote Your Page Too